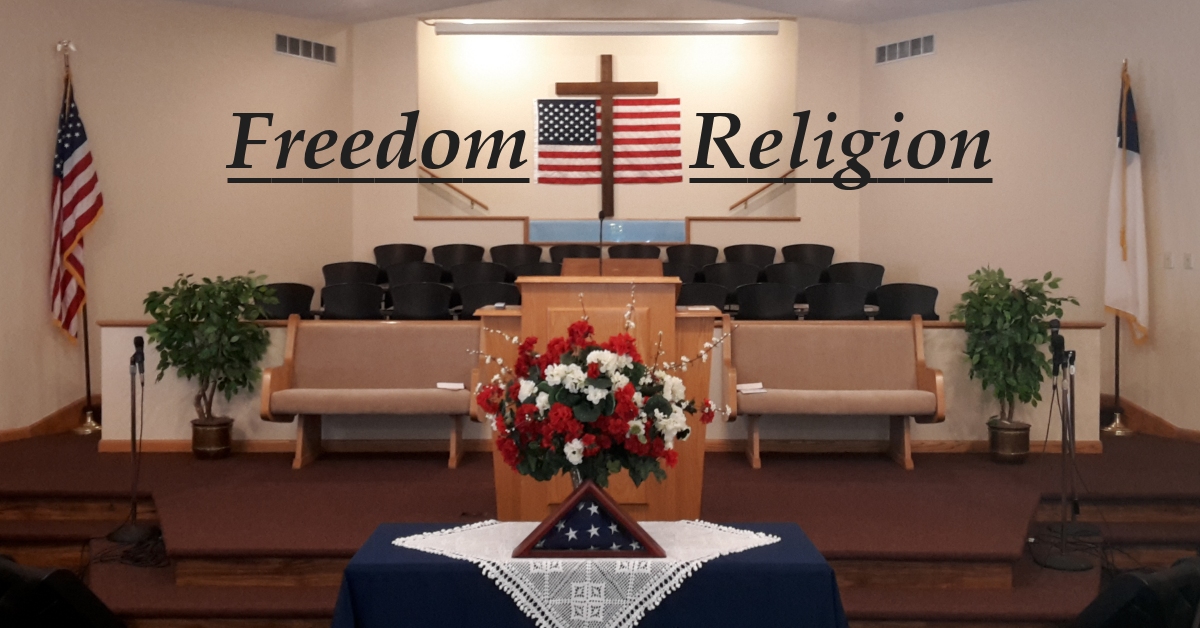 We live in a day in the United States of America where FREEDOM OF RELIGION seems too often just narrowly upheld against much evidence of a government infringing on the inalienable and Constitutional rights of US Citizens and churches. There is no doubt the clear intent of the framers of the Constitution of the United States of America was to allow the free exercise and free speech of religion.

These words are penned in their final version of the First Amendment concerning FREEDOM OF RELIGION:

Congress shall make no law respecting an establishment of religion, or prohibiting the free exercise thereof; or abridging the freedom of speech, or of the press; or the right of the people peaceably to assemble, and to petition the Government for a redress of grievances.

This short statement ensuring our FREEDOM OF RELIGION encapsulates numerous speeches and debates by the writers of the Constitution. To see their clear intent and Constitutional context, we have to go beyond this summarizing sentence and examine the writers arguments. Consider

Consider Virginia’s recommendation to the Bill of Rights concerning FREEDOM OF RELIGION:

That religion, or the duty which we owe to our Creator, and the manner of discharging it, can be directed only by reason and conviction, not by force or violence, and therefore all men have an equal, natural and unalienable right to the exercise of religion according to the dictates of conscience, and that no particular sect or society ought to be favored or established by law in preference to others.

Notice here, the intent is that FREEDOM OF RELIGION under the Constitution should be offered only to such religions that are “not by force or violence.” Until recent years, the United States upheld this argument without question and shut down any religion of force or violence.

The civil rights of none shall be abridged on account of religious belief or worship, nor shall any national religion be established, nor shall the full and equal rights of conscience be in any manner, or on any pretext, infringed.

Consider Thomas Jefferson, who had no hand in framing the Constitution or the First Amendment.

It is by Jefferson’s words that our current political leaders have written into the First Amendment the non-existent phrase “Separation between Church and State.” Much debate surrounds this phrase and the illegitimate use of it alongside the Constitution. However, if our current political leaders want to wield this phrase, they need to support Jefferson’s words which also read:

… no man shall be compelled to frequent or support any religious worship, place, or ministry whatsoever, nor shall be enforced, restrained, molested, or burthened in his body or goods, nor shall otherwise suffer, on account of his religious opinions or belief; but that all men shall be free to profess, and by argument to maintain, their opinions in matters of religion, and that the same shall in no wise diminish, enlarge, or affect their civil capacities.

Much more can be quoted, but this is not written to be a dissertation. So where am I going with this? Until this point in US history, great effort has been made by our political leaders to watch out for any religion or non profit organization that attempted to establish itself through “force or violence” or that “enforced, restrained, molested, or burthened in his body or goods” or that infringed on the “civil rights” of another US citizen. Until this point in US history, the most of our political leaders even served with a noticeable honor and dignity, and would deny the establishment of any such institution in violation of our Constitution.

Knowing the obvious intent of the framers of the Constitution:

Why are our current, highly educated political leaders doing all they can to infringe on the “civil rights” of US citizens by forcing us to accept the establishment of organizations that thrive on “force or violence” and infringes on the “civil rights” and FREEDOM OF RELIGION of citizens of the United States of America?

I am writing this in July 2020 as I witness Black Lives Matter (BLM) and ANTIFA wreak havoc in the very heart of our great nation. BLM’s co-founder Patrisse Cullors said last month, “We are trained Marxists!” This should be enlightening to every “Christian” and religious person in America as to the their true intent. Why? Marxism is contrary to every aspect of the Constitution of the United States of America. Marxism is Communism, thoroughly anti-religion and wholly against the FREEDOM OF RELIGION.
What BLM is doing to our great nation by force or violence is absolutely appalling, and Americans, and Christians, should be outraged!
Worse yet, Karl Marx’s Communist Manifest is being followed nearly to the letter by our Democrat Party and their leaders (Pelosi, EOA, etc.). Their support and use of BLM to further their socialist party ideals puts FREEDOM OF RELIGION, the rule of law, and the Constitution of the United States of America in grave danger.

MARK MY WORDS, THE HANDWRITING IS ON THE ALL, THE CONSTITUTION OF THE UNITED STATES OF AMERICA IS THE NEXT GREAT MONUMENT TO BE ATTACKED AND TORN DOWN BY BLM, BY MARXISM AND BY TODAY’S DEMOCRAT PARTY!

THUS, CHRISTIAN, YOUR FREEDOM OF RELIGION IS IN SERIOUS DANGER!