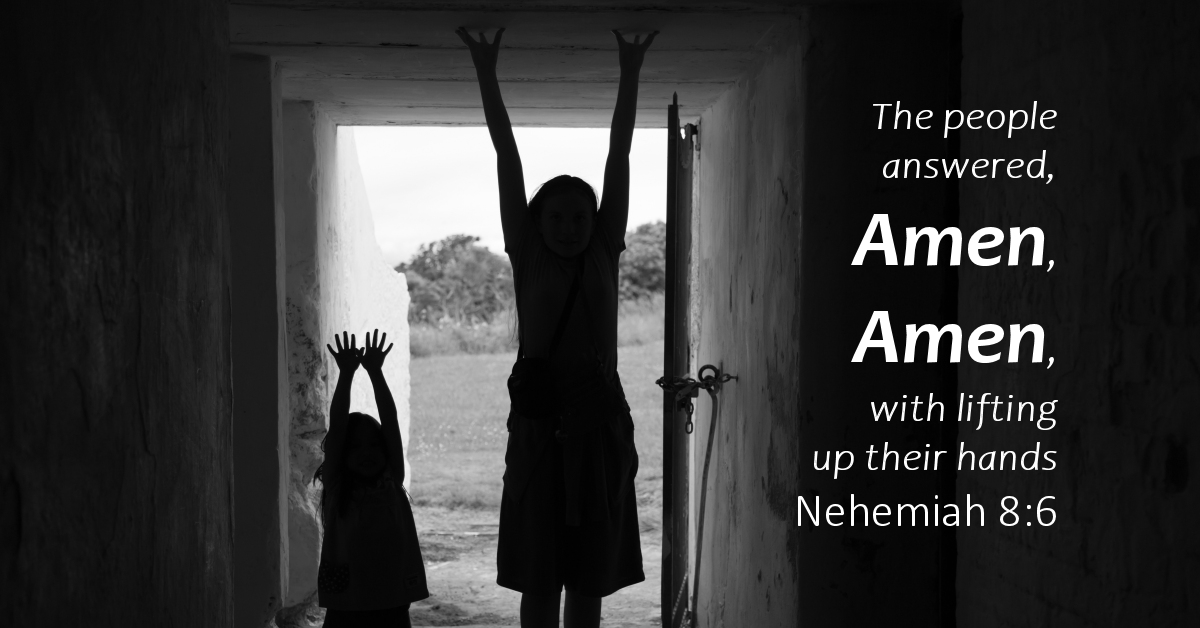 My family on my father’s side is from Boone, North Carolina and my mother’s side is from Clay, West Virginia, I grew up in Baltimore, Maryland, I got married and moved to York, Pennsylvania, then I attended Bible College in Lattimore, North Carolina. So, I attended several Independent Baptist churches both north and south of the Mason Dixon Line. As a result, my tongue was not native to any specific locale. Every time I went north they asked if I was from the south, and every time I went south I was asked if I was from the north. My DNA was seriously confused as to whether I am Yankee or Southerner, so I learned not to be offended by either. Through it all, my favorite preacher was my grandpa, a fireball, hell-fire-brimestone mountain preacher who gave it to us straighter, harder, faster and more excited than any other man I had the privilege to sit under.

After Bible College, I preached and/or presented our ministry in about 400 churches where I found “Amen” used, abused and ignored in our Independent Baptist churches. So, I write this short devotional saying that I’ve seen a wide variety of the use of the word “Amen.” One thing that was very apparent, the manner of the use of “Amen” seemed based more on culture then on the Bible.

AMEN IN THE BIBLE

I think the best place to define the use of “Amen” is from the passage of scripture where God’s man used a pulpit to bring God’s Word to God’s people. Nehemiah 8 is a valuable chapter on our study of and response to the Word of God. We find here that the pulpit is designed by God to properly position His Word in His Church. We find here that the pulpit is not a place to throw out ideas or theories.

Understanding the pulpit is for the Word of God, we see in Nehemiah 8:6 the response of the people is not simply “Amen” but “Amen, Amen.” Understand, they had been without the Word of God for approximately 150 years. They loved the Word and had a holy respect for it, a respect and biblical response to learn from as “all the people answered, Amen, Amen, with lifting up their hands: and they bowed their heads, and worshipped the Lord with their faces to the ground.” I can guarantee you that a majority of today’s Independent Baptists would have had an instant “deer in the headlights” gaze, with their bodies stunned and frozen in place. This would be a direct result of the culture they grew up in and not the Word of God.

To “Amen” respectfully is to do it properly. Properly means it is reserved for a response to the Word of God and not to the words of man. When a man is preaching or explaining God’s Word, “Amen” is definitely in order. However, if a preacher says something casual like, “I slept late, threw on my clothes, and went right out the door before realizing I did not have matching socks,” then “Amen” is absolutely not in order. An “Amen” to this type of statement would be a habitual use of “Amen” and not affirming any scriptural truth. Remember, just as the pulpit was not to elevate and focus on Ezra, saying “Amen” is not used to pump up the preacher.

Let’s have a quick look at the word “Amen” from a biblical perspective so we are not caught using God’s name in vain, which is a clear violation of scripture.

“Thou shalt not take the name of the Lord thy God in vain; for the Lord will not hold him guiltless that taketh his name in vain.”
(Exodus 20:7)

By definition from Webster’s 1828, the goto dictionary for our King James Bible, “Amen” “As a verb, it signifies to confirm, establish, verify; to trust, or give confidence; as a noun, truth, firmness, trust, confidence; as an adjective, firm, stable.” The key word here is “firm.” A few examples:

In equal firmness, God’s people said “Amen, Amen” and not simply “Amen” in Nehemiah 8. Jesus does the exact same thing 25 times in the New Testament. The Greek word for “Amen” is a direct transliteration into the English, but it is also translated “Verily,” where Jesus said as God’s People did in Nehemiah 8, “Verily, Verily” or “Amen, Amen.” Here are a few imported firm “Amen‘s” of Jesus:

“Jesus answered and said unto him, Verily, verily, [Amen, Amen] I say unto thee, Except a man be born again, he cannot see the kingdom of God.”
(John 3:3)

“Verily, verily, [Amen, Amen] I say unto you, He that heareth my word, and believeth on him that sent me, hath everlasting life, and shall not come into condemnation; but is passed from death unto life.”
(John 5:24)

Not only is “Amen” to be firm, but it is to be fervent. Webster’s 1828 defines fervent as “excited; animated” which is how “Amen” is presented in Nehemiah 8:6 “with lifting up their hands” where “lifting up” means “in exaltation and adoration.” The repetition of “Amen, Amen” along with “lifting up their hands” shows intensity in their firmness and adoration. The scene in Nehemiah 8 is one of respect and not disrespect, as in intensely cheering their champion, the Word of God. This is very much similar to sports fans cheering on their champion team today.

An example of fervency is seen around the cross. In Luke 23:21 the Pharisees incited the Jews to fervently cry “Crucify him, crucify him” as they chose Barabbas over Jesus to be set free. Afterwards, Pilate washed his hands and held them up as a testimony before the multitude in Matthew 27:24. Afterwards, Jesus’ hands were outstretched and lifted up as an eternal testimony as prophesied in John 3:14-15. Afterwards, as Jesus lifted up His hands to Heaven, blessed them, ascended into Heaven, they worshiped and praised Him continually in the temple, and did it with a hearty AMEN in Luke 24:50-53.

Our use of “Amen” also should only be used in worship of the Living Word of God, Jesus Christ.

“And the Word [Jesus Christ] was made flesh, and dwelt among us, (and we beheld his glory, the glory as of the only begotten of the Father,) full of grace and truth.”
(John 1:14)

Much more can be said about “Amen,” but I trust what I shared enlightens us to the proper biblical use of the word.Consider these thoughts the next time you feel the need to say “Amen” to ensure your pride does not get int he way:

This coming Sunday, let’s all GIVE GOD A HEARTY “AMEN” to the scriptural points God has given to us today! Do it Firm, Fervent and Forbearing as the Spirit touches your heart!