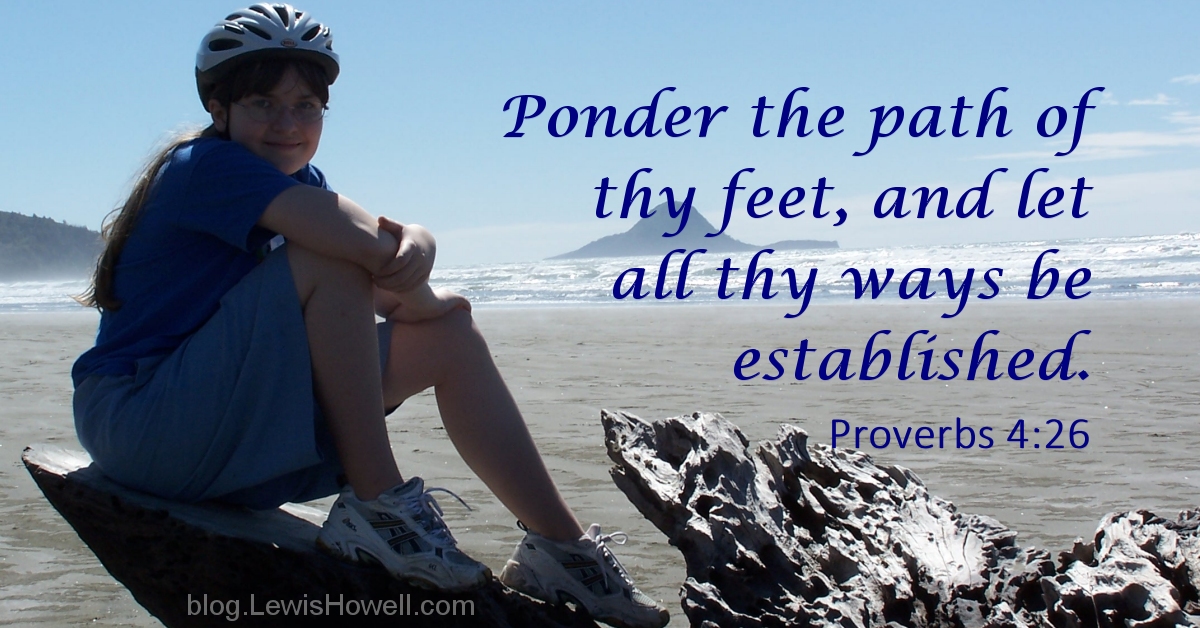 I wholeheartedly trust the teachings from our Independent and Fundamental Baptist (IFB) brothers and forefathers, knowing most have been thoroughly scrutinized and studied over the years. However, I am still responsible before God to dig into each and every topic so I can place my personal seal of approval as led by the Spirit, enabling me to preach it with authority from the heart. The few things I have found myself in disagreement are not topics of cornerstone of doctrine or reasons to question my firm IFB stance. Rather, it reveals the biblical fact that we will not be in 100% agreement until we meet each other in perfection in Heaven above. Herein lies a difficulty in studying something passed down to us, even by sound men of God, that we are to be able to separate ourselves from bias on either side. This, while at the same time, using both sides to help guide us through a thorough and unbiased study.

“Ponder the path of thy feet, and let all thy ways be established.”
(Proverbs 4:26)

For this “Ponder This” I want to challenge thoughts concerning:

Was Judas a saved man?

Pausing for a minute, I can imagine the number of hairs on the back of some necks sticking straight out at this point. I would venture to say that the majority of answers, without hesitation, instantly said Judas is unsaved and in Hell today. I would also venture to say the majority conclude this from what they have been taught and not from their own personal study.

To separate us from bias, let’s start with this straightforward question, “Does the Bible actually say Judas was unsaved?“

There are 2 answers to this question, one comes from man and the other from the Bible. I was taught that Judas was unsaved, but as I searched the Bible for any means of answering “yes” to this question, I found that it did not exist. I exposed myself of doing exactly what we condemn the cults and heretics of, answering solely based on the teachings of man and their books, and not upon God and His Book.

Since there is no “yes” found in the Bible, I found several logical questions comparing Judas with sound teachings in the Bible. These questions put me in place that I believe every born again believe must be, that of the Bereans who “received the word with all readiness of mind, and searched the scriptures daily, whether those things were so.” (Acts 17:11). Often today’s Fundamentalism condemns those who question what is being taught, when in fact, by questioning we become better Fundamentalists rather than followers of man. As for me, I never plan on ditching the term Fundamentalist as some have for this and other reasons, but I plan to make it what it was and is biblically meant to be.

Pondering this question about Judas, while knowing that Jesus was laying the foundation for His church, I ask, why would Jesus put an unsaved man into an ordained position and commission him as the treasurer? If Jesus did this, it would seem to me that He went against everything He taught us through the Epistles concerning the purity of the church. So my journey began to find the answer.

I know that Judas betrayed Jesus, and I know that Jesus knew this beforehand by His foreknowledge (Matthew 26:20-25). However, Jesus also knows exactly how many of us have and will betray Him for money as Judas did, and many other reasons. Does betrayal mean someone is not saved, or that they lost their salvation? This does not say Judas was unsaved.

I know that Judas was an instigator and scrutinized Mary for the amount of money he said she wasted on anointment for Jesus (Mark 14:5). As a result, Jesus actually called Judas the “son of perdition” (John 17:12), calling him the “son of waste” instead of a faithful one like Mary who gave all she could to Jesus. However, today, we witness this same scrutiny in churches and business meetings. Does instigating, making false accusations and true waste of God’s money mean someone is not saved, or that they lost their salvation? This does not say Judas was unsaved.

I know that Luke said that Satan entered Judas (Luke 22:3). This is the key one used by Fundamentalists to say Judas was not saved as a Christian cannot be possessed of Satan. As a young Christian I said the same, until I dug into the context and aligned it with our position as a dispensationalist (Pre Tribulational). In the New Testament, after the Holy Spirit was given, Satan could not possess a Christian because the Spirit would never leave as He did in the Old Testament. However, the Spirit had not yet been given when Satan entered into Judas. Judas was still living during the Old Testament working of the Holy Spirit which would be His work until the day of Pentecost. So looking to the Old Testament there is an example of a saved man being possessed by an evil spirit. The Bible tells us that King Saul is in Heaven, yet he was also possessed of an evil spirit (I Samuel 16:14,23) multiple times, Saul even went seeking after a spirit with the witch of Endora. When Saul was about to die, the spirit of Samuel told Saul, “to morrow shalt thou and thy sons we with me” (I Samuel 28:19). If this was not enough, think about this also, was Judas the only Apostle who Satan entered? Didn’t Jesus tell Peter, “get thee behind me, Satan” (Luke 4:8)? Again, this does not say Judas was unsaved.

I know that Judas repented (Matthew 27:3-4). However, Judas is said to be in Hell, claiming that his repentance that God said he had was in fact false. However, putting all the pieces logically together, I suspect God was showing a true repentance from Judas:

If Judas is definitively said to be in Hell because his repentance showed no evidence of being born again, then this logic has to say that if we see what we would consider true repentance, a that person will be in heaven. However, the Bible is clear that there will be many who we say they had true repentance, but they will be cast into Hell

“Many will say to me in that day, Lord, Lord, have we not prophesied in thy name? and in thy name have cast out devils? and in thy name done many wonderful works? 23 And then will I profess unto them, I never knew you: depart from me, ye that work iniquity.”
(Matthew 7:22-23)

These verses make it crystal clear that we will be looking for a pastor or evangelist in Heaven one day who will not be there, one who we surely knew was saved because they evidenced it by being a preacher of the Word of God. However, men that appear to be good men of God doing a work of God, we easily accept their repentance by their works, but God accepts it only by their heart! This is something no man can see, but we would not know this by how dogmatic Fundamentalists are as to whether Judas was saved or now. Frankly, this tells me more that Judas was saved then unsaved.

These few simple and logical thoughts should rattle through our minds forcing us to backup our IFB teachings with our own personal and en-depth studies. To be fair and honest students of the Word, we must challenge every resource, even by the most trusted sources. I guarantee that if our present day IFB brothers would question our IFB fathers and dig deep into their own personal study, they will come out the majority of the time with the exact same conclusion, as well as with a wealth of other truth that they would gain along the way through their studies.

Understand this, the men who passed sound IFB teachings down to us spent countless hours studying, most of which read page by page and word by word without the ease of computers and instant search results that we have today. For this reason, I love my books! There is nothing like opening the written and printed Word of God; a computer screen or tablet does not have the same affect. The problem today, with the ease of studying, too many IFB men only receive teachings and never spend their own countless hours studying to put the truth deep into their heart to be able to preach it with full authority. Then, when questions and thoughts are thrown at them like what I mentioned above, they either completely fall apart, or question the person asking the questions, or consider the person asking the questions to be a heretic, and all because they have not studied for them selves to be able to give their own sound answer to these questions.

As a result of men not studying the Word of God for themselves, there are countless numbers of men calling themselves Fundamental who are actually far from anything that IFB has passed down to us.

If this continues, the IFB will fade away in the not so distant future.

SO, AS FOR ME AND MY HOUSE, WE WILL STUDY THE WORD!