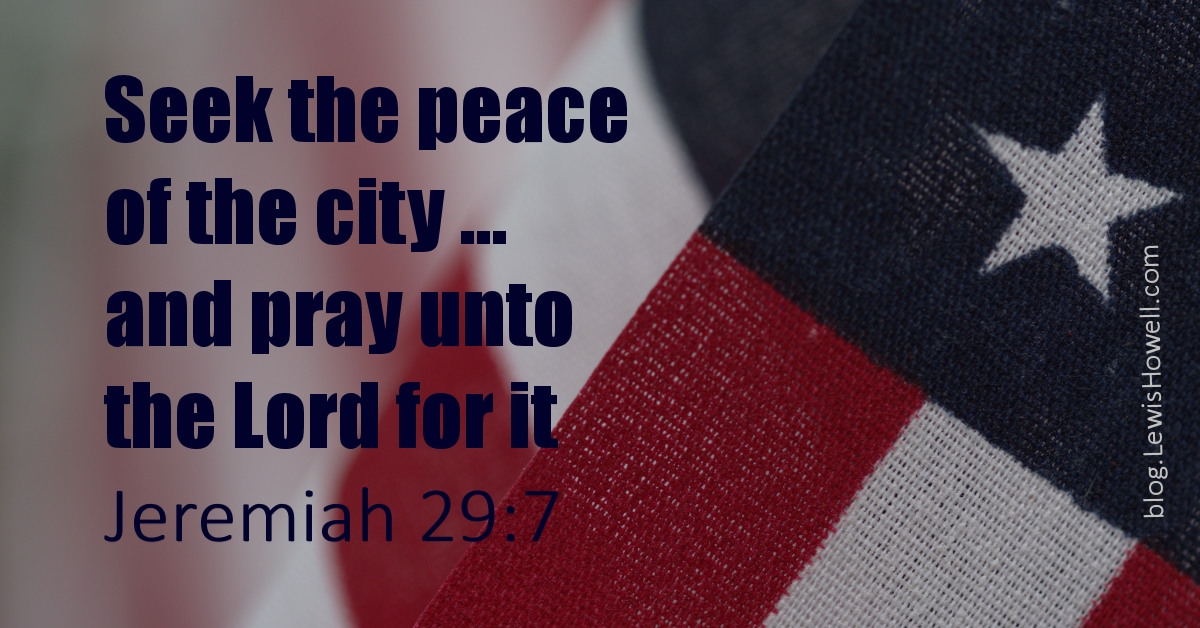 As we do our utmost to “seek the peace of the city” and “pray unto the Lord for it” (Jeremiah 29:7), we do so rallying around the most beautiful ensign of peace and prosperity this world has ever seen. Many nations and evil men have tried their utmost to rip this standard from the hands and hearts of those defending her to the death, but they have failed over and again. They may be relentless, yet the harder they try, the firmer this emblem of peace is held high in triumph, “O’er the land of the free and the home of the brave!”

With freedom and prosperity (purchased by the blood of our forefathers) comes a grave responsibility to uphold the spirit behind the Star-Spangled Banner. Today more than ever, Americans need to stand firmly against the tyrants who abuse the Constitution of our great nation in order to trample our American Flag. Every red-blooded American’s heart should sink and be grieved when they witness such a display of disgrace; hearts ought to sink as if their own grandparents are the ones being trampled upon, our forefathers who shed their blood that the “broad stripes” of our Flag remain brightly and “gallantly streaming!”

It sickens me to see America decay so quickly, and more so at the hands of our elected officials. Rather than enforce the laws they were elected to enforce, they cater to criminals and even cheer on their illegal actions against our national flag.

AS THE LAW STATES, a $1,000 fine and year imprisonment should be sentenced for those who “tramples upon any flag of the United States,” yet more often then not, those defending the American Flag are the ones being taken away in handcuffed!

§700. Desecration of the flag of the United States; penalties

(a)(1) Whoever knowingly mutilates, defaces, physically defiles, burns, maintains on the floor or ground, or tramples upon any flag of the United States shall be fined under this title or imprisoned for not more than one year, or both.

(2) This subsection does not prohibit any conduct consisting of the disposal of a flag when it has become worn or soiled.

(c) Nothing in this section shall be construed as indicating an intent on the part of Congress to deprive any State, territory, possession, or the Commonwealth of Puerto Rico of jurisdiction over any offense over which it would have jurisdiction in the absence of this section.

(d)(1) An appeal may be taken directly to the Supreme Court of the United States from any interlocutory or final judgment, decree, or order issued by a United States district court ruling upon the constitutionality of subsection (a).

(2) The Supreme Court shall, if it has not previously ruled on the question, accept jurisdiction over the appeal and advance on the docket and expedite to the greatest extent possible.

1989—Subsec. (a). Pub. L. 101–131, §2(a), amended subsec. (a) generally. Prior to amendment, subsec. (a) read as follows: “Whoever knowingly casts contempt upon any flag of the United States by publicly mutilating, defacing, defiling, burning, or trampling upon it shall be fined not more than $1,000 or imprisoned for not more than one year, or both.”