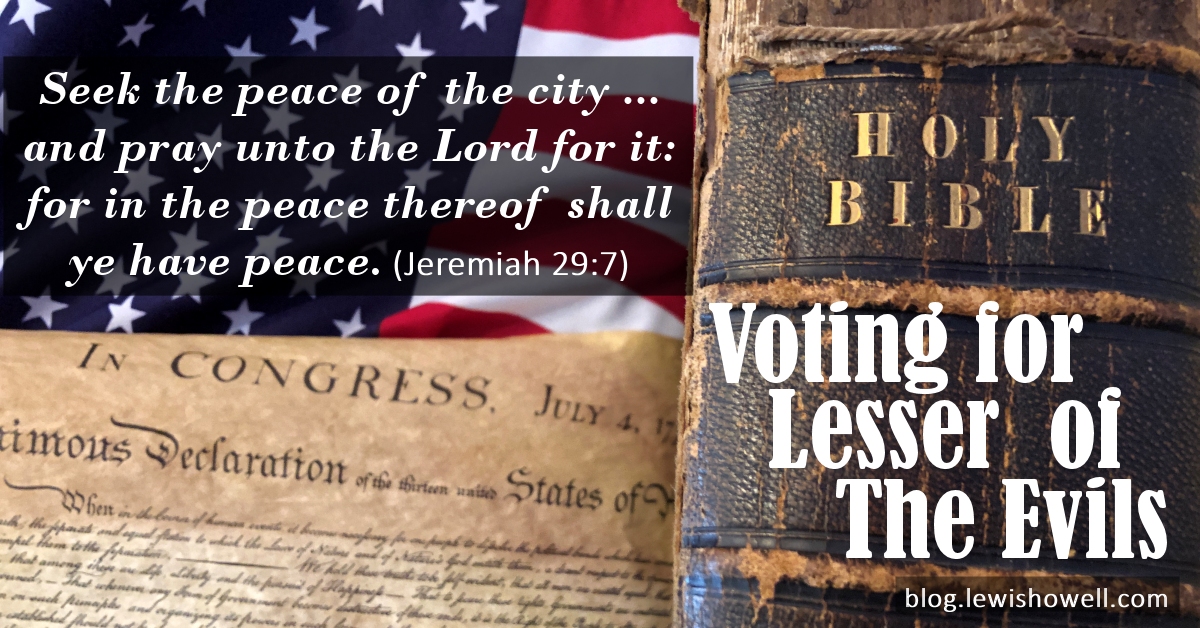 The adage, “Vote for the lesser of the evils” is in all honesty exactly what we are obligated to do to ensure our government aligns closest to God’s Law. Fact is, there will be no perfect government until the Millennial Reign of Christ. We are told in several passages of scripture that our society, our government and even our churches will wax worse and worse with evil and deceitful men until the Earthly Reign of Lord and Savior, Jesus Christ.

Everyone understands that as soon as President Trump opens his mouth, there is no doubt that he is not a Christian. Furthermore, from his rhetoric, to his mild obscenities, to his demeaning nicknames and his name calling, he shows just how unpolished he is as a politician. To be perfectly honest, if his mannerisms were set alongside the elegance of the framers of the Constitution of the United States in 1789, they would surely have had him cowering out of the very halls he has been elected to command.

So, how do we reconcile a vote for President Trump? Aside from the fact that he does not believe as the liberals do, that Christians are the problem in America, over all President Trump is pro Christian and pro to key issues that will determine if we as Christians can live “a quiet and peaceable life in all godliness and honesty” in America. After all, we are never commanded of God to change the world, or to clean up the world’s sin, or to bring in the Kingdom, but we are told time and again to “seek the peace” and “pray unto the Lord” that God will allow us to have peace regardless of who is ruling our nations:

“And seek the peace of the city whither I have caused you to be carried away captives, and pray unto the Lord for it: for in the peace thereof shall ye have peace.”
(Jeremiah 29:7)

“I exhort therefore, that, first of all, supplications, prayers, intercessions, and giving of thanks, be made for all men; 2 For kings, and for all that are in authority; that we may lead a quiet and peaceable life in all godliness and honesty.”
(I Timothy 2:1-2)

A first question I must ask and you must consider, if Joe Biden wins, can we trust what God said above? I can! Yet, Biden is by far the greater of the 2 evils, a man who has declared war on Christianity and promises to bring decade’s old hardship upon America as a whole. He has deceived a mass amount of America, and the power that his political backing obviously has is one that is capable of dismantling any election around the world and turning it to their favor. There is so much interference in relation to the Biden campaign, with evidence, that it makes no sense whatsoever that his campaign is allowed to continue. This alone shows the amount of power that is backing the man. Yet, we can trust God for peace in our lives regardless of who rules our nations!

With a simple history lesson and some logical facts, it should be easy to see that when you “Vote for the lesser of the evils” you are seeking peace with the rulers of this world which is all that God has commanded us to do. No President or Convention is going to align fully with the Word of God, they are not the church nor are they pastors, they are under the rule of the Prince and Power of the Air who has done his utmost to satisfy II Timothy 3:13 as which is prophesied in the last days (John 8:44; Ephesians 2:2-3).

“But evil men and seducers shall wax worse and worse, deceiving, and being deceived.”
(II Timothy 3:13)

Though we cannot stop God’s prophesy by making these “evil men and seducers” into righteous men, God has made a way that we can live at peace in their pagan land, just as Jeremiah 29 teaches us. Some say this chapter is not for us today, when in reality it is for every generation. How? There is no direct command here of how to “seek the peace” but that we include prayer. We are blessed today to live in democracies and republics that allow us to vote for the peace that we want in our countries. I cannot say what it was in Jeremiah’s day, but we can be guaranteed it was something that required the action of their free will accompanied with prayer.

With all of this, I can say without hesitation, if we do not like Donald Trump then we can still vote Republican. Republicans, though far from perfect, are by far on the right side of many key biblical issues of peace such as:

Any party that restricts any of our religious liberties is a party that could eventually throw the Bible completely out of their decision making, which is exactly where the Democrats and Liberals are today, and sadly where Republicans seem to be heading.

With all of this said, unlike some men I thought were my friends, I will never condemn any American for voting 3rd Party, just as I will never condemn any American for voting against Donald Trump. this is exactly the wedge that Liberals want driven between Christians and it is frankly as anti American as it gets. I am simply giving some information that anyone who wants to vote for President Trump can be assured that they are not violating scripture in doing so, but rather supporting more scripture then not.

SO HOW ABOUT THAT 3RD PARTY?

What is sad about today’s Conventions, they are nowhere close to where they were just a few decades ago; Democrats are not the same, and neither are Republicans. This makes voting a challenge when a viable 3rd Party comes onto the scene like the Constitution Party. I actually like this party! The question then turns to whether we should vote to the lesser of the 2 evils, or cast our support behind a party that will not become a contender for decades to come. Understand this, your vote for this party will have no affect on them in this election because they cannot gain enough support in the Electoral College. A vote for them will help or hinder the other 2 evils, and in the case of today’s election it will help the greater of the 2 evils, Joe Biden. Our Constitution actually makes it difficult for a 3rd Party to be a contender because a close 3-way race can not give any of the parties enough seats for the majority that is needed to win the Presidency. So, for the Constitution Party to contend, they must knock another party completely out of the race before the the race even begins. Until they are on the ballot of every United State, this is an impossibility. They have years of work ahead of themselves, upending local and State legislatures, which is where a vote for this 3rd party should have already been making headway. Voting for them now, in a major election has no hope of Christians seeing any peace being voted into the White House. With this said, Constitution Party is absolutely viable on the local level, but for the Presidency, Republican is the only viable choice that will allow Christians to live “a quiet and peaceable life in all godliness and honesty” in America. Yet, like I said above, God can allow us to live in peace even under a Joe Biden.