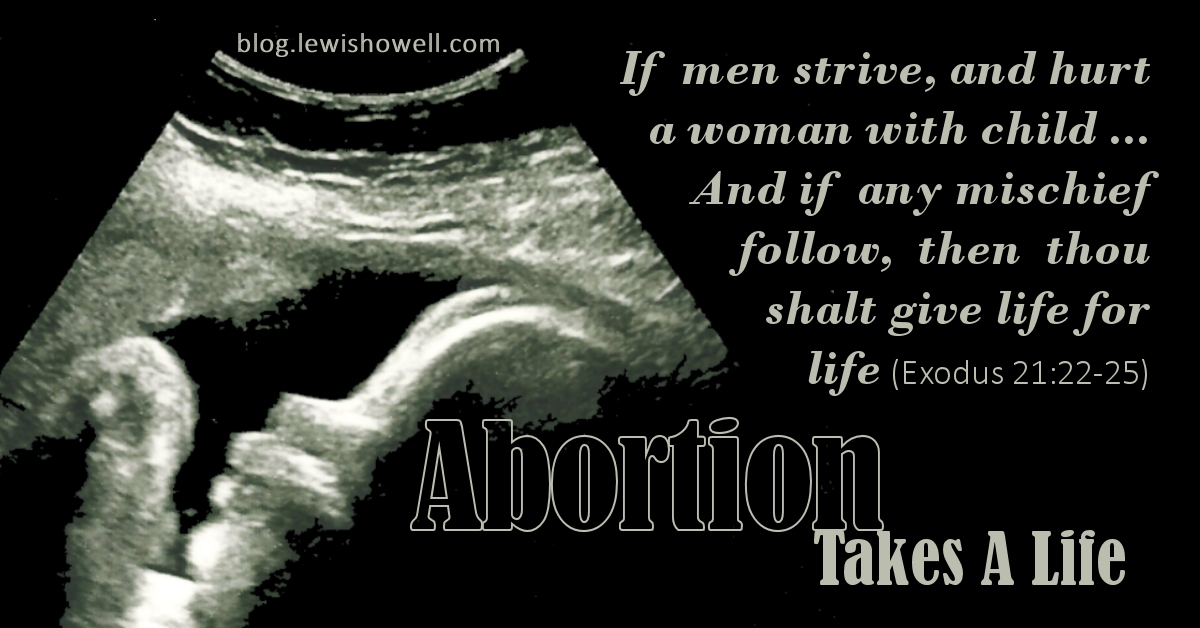 In New Zealand, 13,285 ABORTIONS have been performed from 2017 to the writing of this blog post. During this same time frame, in New Zealand, there have only been 82 ADOPTIONS! In March 2020, New Zealand decriminalized abortions. Until now, the 10’s of thousands of babies were aborted because of supposed medical necessity. Under the new law, women no longer have to be assessed by a health practitioner for mental or physical well being before 20 weeks.

Abortion is not a new term to our generation, my etymology dictionary takes it’s usage back to the 1500’s. Clear definitions in the 1800’s aligns with the usage of the word in our day:

Looking to the Bible, I find both Abortion and Criminal Abortion dealt with under the Law in the Book of Exodus. Walking through these verses will reveal that Abortion today is a Criminal act and a sin against God our Creator. I want to briefly look through these verse to see what God has to say on this topic:

“If men strive, and hurt a woman with child, so that her fruit depart from her, and yet no mischief follow: he shall be surely punished, according as the woman’s husband will lay upon him; and he shall pay as the judges determine. 23 And if any mischief follow, then thou shalt give life for life, 24 Eye for eye, tooth for tooth, hand for hand, foot for foot, 25 Burning for burning, wound for wound, stripe for stripe.”
(Exodus 21:22-25)

The Hebrew word for “fruit” means “young child, or young animal.” By definition this means that life has already begun in the womb. This word is used in our King James Bible, whereas it is incorrectly translated as “miscarriage” in many corrupt Bible versions (AMP, MSG, NASB, NRSV, CEV, etc.). There is a Hebrew word for miscarriage found in Exodus 23:26 as “cast their young.” Logically, then, to say Exodus 21:22 is a miscarriage, where miscarriage is when a baby has already died in the womb, how then can “mischief follow” upon a dead baby. My point is, Exodus 21:22 cannot be a miscarriage, but rather it’s an abortion which is the termination of life in the womb.

Contextually: the baby is the focus of the “mischief.”

The punishment handed down to the one causing the “mischief” is determined by the outcome of the baby and the mother. God reveals that the baby is or was a living human being by virtue of declaring a sentence to be “life for life.” Consider this, if the purpose of this passage was not to put focus on the life of the unborn child, then this punishment would be redundant because the declaration for “life for life” was already made in Exodus 21:12, “He that smiteth a man, so that he die, shall be surely put to death.”

Contextually: the baby is the focus of the “life.”

Not only is there “life for life,” but Exodus 21:24-25 reveals the equality of the “life” of an unborn child to that of a healthy adult. Thus, Criminal Abortion is considered to be murder in the eyes of God. The punishment fits the crime of murder as exacted also in Leviticus 24:20 and Deuteronomy 19:20.

Contextually: the value of the “life” of the the unborn “child” is equal to that of the one performing this Criminal Abortion!

God’s Holy Word is simple to interpret and to understand by the guidance of the Holy Spirit of God, which is promised to born again believers (John 16:13). This simple blog post is written to reveal that Criminal Abortion existed under God’s Law long before anyone reading this post was “fruit” in their mother’s womb.

Clearly, God’s Law sets forth His divine protection for the unborn child, revealing to us that the sanctity of life in and out of the womb is given equal protection by God.