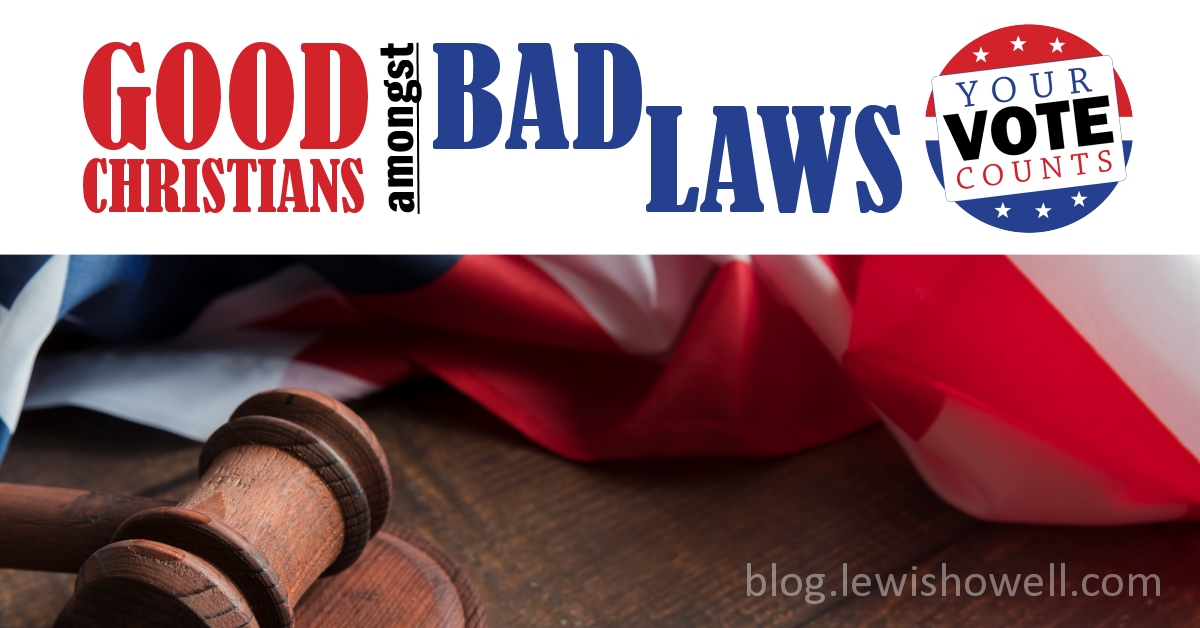 God ordained human government “for the praise” of righteous men and “for the punishment of evildoers,” by God’s will, through the upholding of His Law (Genesis 8-11; I Peter 2:14; Romans 13). When it comes to man’s law, though, governments were never given authority to pass laws that violate God’s Law. Yet, since the Garden of Eden, as sin has corrupted all that God has ordained, human government continues passing sinful and evil laws. Governments have failed in their God ordained obligations, and consequently, they have made lawbreakers out of good Christians and good citizens.

There are many examples in the Bible of governments passing Bad Laws:

Daniel, as a good example, was a model citizen and loyal servant to King Darius in the Medo-Persian Empire (Daniel 6). Daniel had enemies who hated him and his God, so they devised a plan to remove him from office. They used Daniel’s integrity to force him into breaking a law that was punishable by death ─ for 30 days it was illegal to petition or honor any God but the King. King Darius’ pride got in the way when he inadvertently passed this law. Nevertheless, Daniel didn’t hesitate as he “prayed and gave thanks before his God as he did aforetime.” Daniel’s enemies quickly reported him to the naive King. The last thing King Darius wanted to do was punish his faithful friend Daniel, but he could not deliver him from the consequences of his own evil law. The King had no choice but to send Daniel to the lion’s den, into the jaws of death that Daniel accepted when he disobeyed the government’s Bad Law. Regardless if the law violates God’s Law, human government has the God ordained right to punish and we have the God commanded responsibility not only to disobey a government’s evil laws but to accept their consequences also (Acts 4:19; 5:29). Because Daniel was faithful to God’s Law rather than an evil law ─ we all know this true story ─ God was faithful to deliver Daniel from death. Afterwards, King Darius punished those who tricked him by casting them into the lion’s den where they were not spared by God.

Today, Bad Laws contrary to God’s Law continue to be passed, making good citizens into lawbreakers ─ laws endorsing immoral lifestyles, hindering freedom of religion, etc. Ungodly laws like these turn good Christians into lawbreakers simply for expressing their beliefs in God’s Law as they expose the evil in the Bad Laws of their government. It’s not wrong to make your disagreement known concerning the direction our leaders have passed laws that are contrary to God’s purpose of government, yet, good Christians are turned into common criminals simply for standing on the Bible.

The answer to bringing our governments “unto the knowledge of the truth” is exactly what Daniel did, prayer ─ “supplications, prayers, intercessions, and giving of thanks.” In spite of who is in power, by exercising these obligations given by God to every Christian, we “may lead a quiet and peaceable life in all godliness and honesty” under both a righteous or an evil government (I Timothy 2:1-4).

By no means does this say that we are not to take civil action if our laws afford us the right ─ peaceful protests, submissions to our governments’ laws, voting, etc. Sadly though, too many Christians take lightly the rights given to them under their government’s laws. In fact, when voting is a government’s law, Christians are disobedient towards God when they do not do what their Good Law obliges them to do. Here in New Zealand, if you do not register to vote it is punishable with a $100-200 fine. Requirement to cast your vote is not backed with a punishment, but it is a Good Law our human government has told us to do as outlined here in New Zealand under the “Electoral Act 1993.” This Act in no way violates God’s Law. By voting under Good Laws like this, we as Christians have the opportunity in our Democratic societies to influence how our governments pass Good Laws in accordance with God’s law. The adage, “Vote for the lesser of the 2 evils” is in all honesty exactly what we are obligated to do to ensure our government aligns closest to God’s Law. There will be no perfect government until the Millennial Reign of Christ, and we are told that our society, our government and even our churches will wax worse and worse as this Earthly Reign of Christ. We are to do our part in both our society and our churches to vote into office the purest of what is on the ballots, otherwise we can be guaranteed that Satan will continue the work that he began in the Garden of Eden and do his utmost continue corrupting all that God has ordained for mankind.

Let’s not be GOOD CHRISTIANS AMONGST BAD LAWS simply because we refused to get out and vote for the best of the worst of what is available to us!